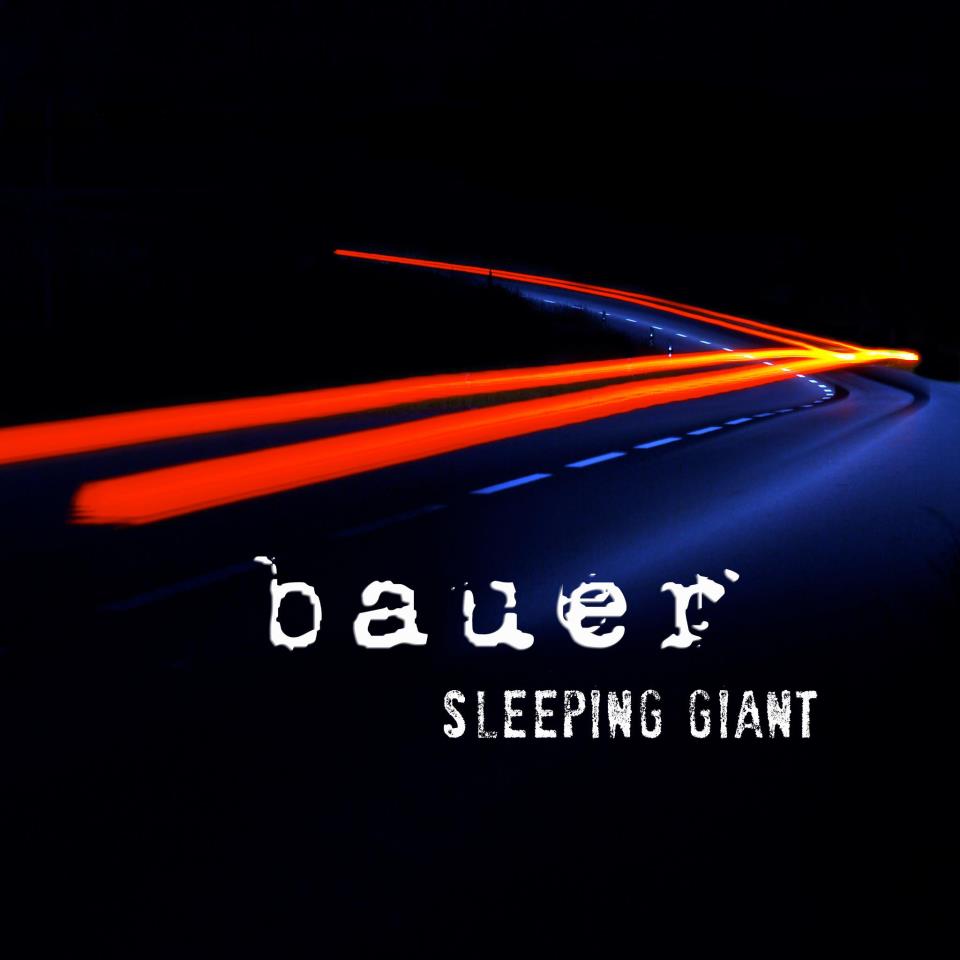 Bauer are an alternative electronica- infused rock band from Manchester whose new wave of synth-pop is reminiscent of the New Romantic movement of the 80s, whilst maintaining a jangly rock veneer. With Greg Matthews on vocals/synth, Neil Treppas on bass, Michael Reed on guitar and Lee Bradbury on drums, Bauer are very much your modernist,  polished band. Having formed in 2004, Bauer  have performed alongside I am Kloot, Snow Patrol, Turin Brakes, Brendan Benson and The Bluetones and are testament to the fact that you don’t have to glam up with all the heavy eye make-up and frilly shirts to produce that classic, sleek synthesized sound.

Having been busy in the studio, Bauer will be releasing their debut album, “Sleeping Giant”, digitally on November 26.  It’s an immaculate album and highlights Bauer’s skill at synchronising an array of polarised synths with a lagoon of shimmery riffs. Notably, it’s also the subtle quivering and digital inserts which makes their debut album, “Sleeping Giant”, very much a progressive and sublime album.

In keeping that new synth-pop, Bauer released a cover of Fiction Factory’s “Feels Like Heaven” as their first single on 5th November.  Although Bauer’s version is very similar to the 80s original, it has been given a pristine make-over, incorporating  those retro dream-pop synths, whilst showcasing a more textured synth presence. Whilst the original gave us those quintessential 80s jangly riffs and shuffle beats, Bauer has filled in the gaps with an underlay of shuddering inserts and tinkering riffs, creating a more cohesive and elongated sound.

Despite its reverberating soundscape, “Barrell One” is a smooth catharsis that is captured through Matthews’ deadpan vocals. With lyrics such as “If you see me dying, its really me drowning…”,  you hear how Matthews’  vocals synchronise with the icy synths and menacing drones that sweep across the teetering tones.

Along with its windswept synths, “Connected” is also a song which is shaken by the interlude of industrial riffs that clatter against the mutating Air-esque synths. Amongst all the signature jangly riffs and prominent bass, “Connected” unleashes a subtle wave of digital inserts that circulate beneath the ambient backdrop.

Opening with muffled vocals, it’s not long before Matthews’ vocals soar in and out of the angular riffs and sweeping synths. Along with its catchy chorus, “Shotgun” is also characterised by the plucky riffs and steady bass that contrast against the trembles of the space-pop synths.

“Don’t You Move” is one of the album’s most melancholic songs, whose sombre vocals lift in juxtaposition with the chimey riffs, euphoric  and trickles of jittery synths .  It’s once those crunchy riffs emerge that “Don’t You Move” takes a more robust tone, uprooting the melancholic  demeanour.

“Get it Right”  illustrates once again Bauer’s skill at synchronizing the jangly riffs, bouncy bass and ambient synths that merge together creating striking  interludes of a cacophony of sounds that tilt, bash and tinker in chaos. With remnants of early U2, it’s the plucky riffs that provide the weather-beaten romanticism, along with the high-pitched  synths . Along with its crestfallen lyrics, “Get it Right”s melancholy is crystallised in the haunting piano-synths that nestle against the beating drums and jangly riffs.

“Sky Turn Black” Talking on more murky tones, it’s the blackened, bouncy synths and baritone bass which synchronise with the melancholic lyrics.  Along with puddles of jangly riffs, it’s the scrapey riffs that resonate against the chorus: “I can turn the sky black, I can make it all come back…” . Again, illustrating their electronic diversity, “Sky Turn Black”’s darkness is briefly transfigured by the flurry of orential- esqe synths and digital splodges that stream against the crashing riffs.

“Starting Again” glides through the stream of ambient and New-order-esque synths that filter through the throbbing drums and tinkering riffs. It’s once the chorus kicks in that “Starting Again” adopts a rockier edge, unleashing an influx of crashing riffs that weigh heavily against the morphing synths.

With its heavy  presence of rotating chiming riffs, “Nowhere To Turn” revels in a mass of skitter ambience, that becomes infused with the sweeping euphoric synths. Lyrically lovelorn, “Nowhere To Turn” is yet another polished production, whose textured soundscape reverberates against the customised space-pop  synths and serene vocals.

“Change Forever” is an infectious song, which showcases Bauer’s skill at creating an atmospheric backdrop against the emotive lyrics. Apart from the resonating vocals, “Change Forever”’s temperament is altered by the angular, eerie riffs that slyly cascade and weave around the sweeping and reverberating synths. Along with the synchronised bass and drums, “Change Forever” is meticulously packaged, creating a robust synth-pop song.

“Never Look Back” broods with a clatter of industrial, smudgy ambience, which is obscured by the puddles of jangly riffs. Along with its grittier riffs, rotating bass and up-tempo drums, “Never Look Back” is given a rockier edge that builds to a crescendo before collapsing into a synthetic heap.