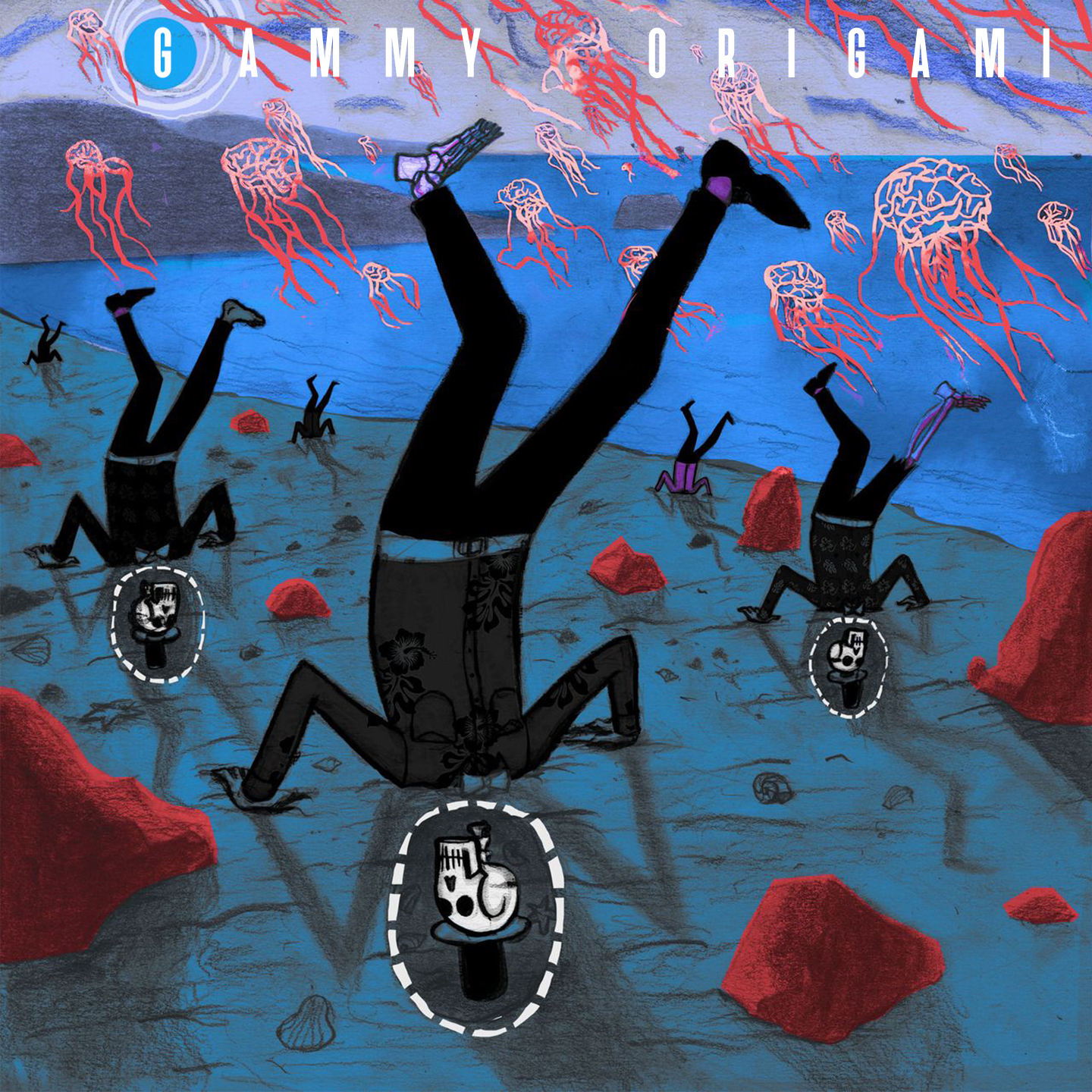 Listening to Gammy Origami is a breath of fresh of air. It’s a sea breeze of exotic escapism, that sends you to a place of fun, frivolity and improvised innovation. It’s a sensory pleasure that makes you feel like you are in the company of friends who share the same vision, dreams and frequency of energy, that power surges from the Gamma Rays of the sun. Comprised of John Haggis from Ireland, on vocals and drums, Alfonso Palma from Chile, on guitar, bass, drum, xylophone & Spanish vox, and Alex Duplak from Slovakia, who plays bass and guitar, Gammy Origami are a class act, who leave no stone unturned when making music. They are a cosmopolitan collective of musicians originating from different parts of the world, whose shared passion of music brought them together and rejuvenate through a cosmic meeting of minds.

Having been busy in the studio, Gammy Origami have released their debut EP, Now That You Got Me Thinking, whose five fold track include a Spanish version, a sixties-soaked alternative version, an exclusive Hourglass remix, plus a bonus live acoustic version. The EP was mastered by Patrick Klem, in North Carolina, who has worked with Sonic Youth, Kurt Vile, Bardo Pond and Yo La Tengo. The Gammy Origami EP is set to be released by FIFA Records on July 1st, 2022.

As an EP, Now That You Got Me Thinking is a deluxe bundle of music, that ventures down the many avenues of alternative rock and picks up the pebbles of post-punk and throws them into the oceanic depths of guitar-laden music. It’s an EP that dives deep into the undercurrents of Krautrock, surfs the waves of noise-rock and tinkles on the sultry shores of folk-rock. It’s music that flies freely through the canopy of tropical trees, relaying through the quivering tangles of new wave, whilst soaking in the sun’s effulgence. It’s an EP that takes you on an array of adventures, that surfs the tides of shoegaze, tipping its toes in a lustrous lagoon of dreampop and re-discovering the spiral shells of neo-psychedelia. As a band, Gammy Origami are an infectious set of artists, whose eclectic music creates a broad and colourful palette, that intermixes an assortment of genres and sub-genres. They are a celebratory collective who lift the spirits, with their amazing music, whilst reflecting from the deepest depths of their soul.

If the band Love, and Syd Barrett, had been dismantled and placed in a soul sanctuary and given a relaxing remedy of Fleet Foxes and Deerhunter with an energy drink of Throbbing Gristle, then I reckon they would sound like Gammy Origami. It’s music that unearths the roots of space-rock innovation and adds an extension of renovation with an open space of nomadic and otherworldly charm.

It’s not just the hypnotic vocals that entrance, or the brooding undercurrents of tension, the oblique riffs, or the shimmery shift from dusk to dawn, but it’s the authentic joy and zest which seeps through every pore.  Here is a band who fully embrace the lateral thinking and abstract process of creating music. They are an intuitive, perceptive, diverse, bohemian kind of band who are incredibly gifted but make it look so easy. They are so chilled out, amiable and creative they make you feel like a bystander in a jovial jamming session, sat beneath the stars all cosy and warm.

An exemplary work of art, Now That You Got Me Thinking is a musical masterclass of childlike wonder, elated enthusiasm, and meticulous melody making, professionally produced and immaculately crafted. It’s music that is so versatile, effortlessly cool and visceral, you would think each version was a completely different track, or created by different bands. Unlike many EPs out there, Now That You Got Me Thinking, metamorphoses through many incarnations, spreading its wings and crossing over into a wide audience, with a more international appeal. It’s a youthful burst of spontaneity, that flies freely in between the weathered coastlines of dream-pop, unearthing the frosted sea glass, shaped and shiny from the stormiest of seas, yet durable and resilient from the passing of time.

2) Now That You Got Me Thinking (Spanish) is a burst of energy, an adrenaline infused version whose Spanish tones, adds a youthful exuberance against the spiked riffs. It’s a heart-thumping catharsis that pulsates in the soul of post-punk and throbs from the veins of garage rock. Along with outro of haunting synths and stellar shudders, Now That You Got Me Thinking (Spanish) takes a quantum leap into the space-rock zones of Krautrock whilst orbiting in the dark matter of electronica. Through the eerie synths, Now That You Got Me Thinking (Spanish), slides down a wormhole of experimental rock, and bounces from the space hoppers of surrealism. It’s a subliminal side-show that mutters from the menacing shadows of dark-wave and joins forces with cinematic arthouse of avant-garde rock.

4) Now That You Got Me Thinking Hourglass Remix backtracks into the grungy-garage of noise-rock and revs in the backstreets of post-punk. It’s a sensory surge of scrapey drones and razor riffs that angle-grind through the metallic mesh of industrial rock. Powerful and precise, retro and contemporary, Hourglass cuts through the steely sonics of Krautrock and loops on an interstellar drive of art-rock. It’s a mesmerising track that time travels in the dark matter of space-rock, whilst rotating with the chromatic graters of neo-psychedelia.

“Now That You Got Me Thinking”, is available to purchase on Digital Download & Limited Edition Cassette, via FIFA Records, from 1st July 2022.